Cool is not cool
- Matt Smith in Doctor Who, written by Steven Moffat

As I walked into the office I recognised her immediately, the hair still backcombed to a ridiculous height, the same sneering face as she harangued one of her colleagues.
'I won't be the one to go,' she snarled 'Even them twats from head office will know I'm quality, they'll get rid of you, you're crap'.
I checked my paperwork, Tracy Burton, how could I not have realised. She'd been the coolest girl in my class & made my live a living hell.
For the first time ever I was going to enjoy making someone redundant!

She paused opposite the  grand entrance to the hotel, she would walk through the doors soon but for now she paused, not because she was intimidated by the hotel, no, she just wanted to run through the instructions the agency had forwarded from the new client.
Hotel guests all know that the concierge will be able to provide them with a hooker, but those with more unusual tastes use the agency.
She checked her suitcase, no handcuffs or nipple clamps this time, just a tea strainer, wellington boots & tube of Deep Heat, oh well what ever floats your boat, she thought.
Posted by Hard up Hester at 11:44 1 comment: 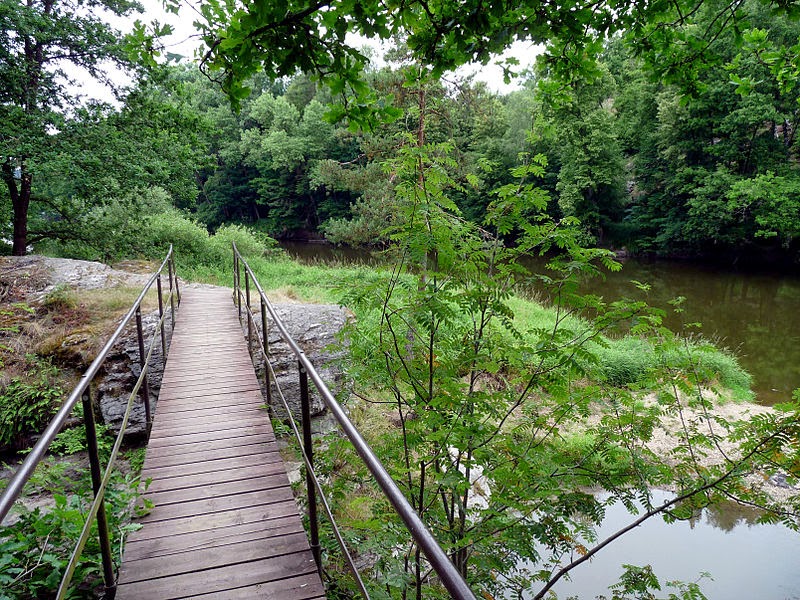 Image courtesy of cheva and taken from the Wikipedia Commons

Dare she take that walk, the one over the bridge?
Even on a good day, when she wasn’t down or depressed, she felt drawn to the water, looking into its oily, swirling depths.
Today, the anniversary of losing everything she held dear, dare she.
Only one way to tell, kill or cure, she’d walk that way, over the bridge.
One day she wouldn’t arrive on the other side.
Posted by Hard up Hester at 07:27 1 comment:

It was proving a bitter pill to swallow, but it was of his own making, his desire, his obsession with fairness, or parity as he chose to phrase it.
He was entitled, surely, to parity. She'd had 5 or 6 lovers before they met, where as he'd only had sex with 2 girls and one of them had given him a dose of the clap.
He had so little sex as a teenager, two shags in ten years it wasn't fair, he needed more, to even the score.
Eventually it dawned on him that he was never going to catch up, make up the shortfall between her sexual conquests before they wed and his measly head count.
He tried to even up the numbers by cheating, but he really didn't have the social skills to get women into bed with him, he spent days, weeks sometimes working out long list of arguments as to why one of his colleagues should have sex with him, funnily enough this didn't seem to work & as rejection made him aggressive & resentful sometimes even a 'no' that meant 'ask me again' ended up with anger & recriminations.

Browsing on line he found the answer, swinging, woohoo, this was for him. No difficult conversations, no persuasion, all he had to do was grab a set of keys from the bowl & he could get laid.

He emailed an application, when the reply arrived it posed another problem, to go wife swapping he needed to take his wife with him & she didn't want to go! And anyway, if she went too, the head count would still be uneven.
Posted by Hard up Hester at 11:32 6 comments: